Grubs – they’re almost as ugly as the damage they cause. These pests are so sneaky that it’s often difficult to even know they’re doing damage until it’s too late. Worse yet, the healthiest lawns are the tastiest for grubs. 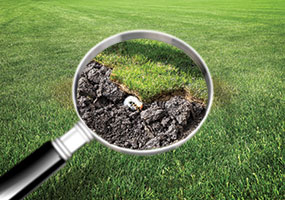 Grubs come from several kinds of beetles, and there are varieties nearly everywhere. One type, the Japanese beetle, has been a problem since 1916, when it was accidentally introduced into North America. Before that, it was only known to exist on the four main Japanese islands. As of 1926, Japanese beetles infested 3,850 square miles; by 1952, the area of destruction had exploded to 76,500 square miles.

Grubs are actually larvae of beetles. Most are off-white with brown heads and known by the “C” position they take when disturbed. Grubs overwinter underground and begin feeding on turf roots in spring and summer. 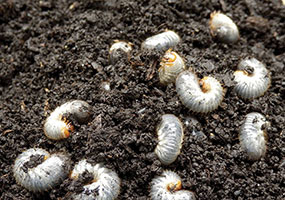 Grub feeding leaves irregular brown patches, and the lawn may have a spongy feel. Sod will roll up like loose carpet if the roots are already destroyed. The only way to know for sure, though, is to gently pull up a small section of sod. If you see more than four grubs per square foot, you have a problem. Lawns with severe grubs can have 40-60 per square foot.

When treating for grubs, proper timing makes a huge difference. Ideally, treatments are applied weeks before grubs are active, so grass plants have time to take it in. Fortunately, later treatments are also effective. If you have seen obvious signs of grub activity, don’t hesitate to contact us today! 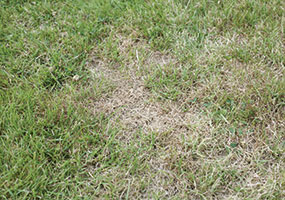